Up The Creek Music Festival takes place on the banks of the Breede River and this year would be it’s 27th year. Four days, three nights, four stages and over 40 bands – it was time for a party! Bryn and I decided to “glamp” and checked in to the Heartbreak Motel – Graceland on Thursday evening.

If you can afford it, “glamping” is the way to go – luxury tents with two single beds, electricity, hot showers, a cooked breakfast every morning, private bar with SuperSport on a big screen TV and a private swimming pool – somewhere to escape the crowds and loud music from time to time. 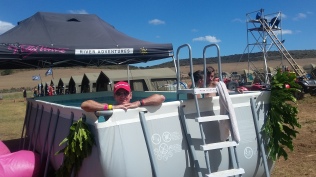 The Jagermeister Main Stage is set up under the trees with plenty of grass to make yourself comfortable while there is a late night stage in close proximity. A bit further away towards the river is the massive food court with it’s own Sedgewick Old Brown Sherry stage. There are many food trucks selling prego rolls, pizza, breakfasts, chicken, chips – you name it.

And then there’s the Sedgewick River stage down on the banks of the Breede River. Spectacular.

After checking in on Thursday we grabbed our cooler box and headed to the Main Stage. At this festival you are allowed to bring your own supplies which does make it a little easier on the pocket. Unfortunately we missed the first act, Jack Hammer, but made it in time to watch a two piece band called Medicine Boy. They are Lucy Kruger and Andre Leo and call their genre Dream Noise. They play electronic mellow rock which is quite ghostly and hypnotic. I really enjoyed their performance and will be looking out for their shows in Cape Town.

Next up was a young rock outfit from Pietermaritzburg called MT Seas. They were so excited to be playing in their first festival and their music was excellent, solid rock. They describe their music as alternative rock, with a dominant bass and melodic lyrics. I rated them as one of the standout performances of the weekend.

Jackal and the Wind play modern melodic folk in the same mould as Short Straw. They come from Paarl and describe themselves as a South African Indie Folk Band. Enjoyable.

Albert Frost then took to the stage as the crowd began to get a bit more vocal. What an amazing show he put on. Albert is a world renowned blues/rock performer and has so much energy on stage. His music is powerful and he had the crowd head bashing and singing along. He played a few songs using a violin bow on the strings of his lead guitar – simply mind blowing. Albert was another standout performance of the weekend.

I eventually retired to the luxury of my tent with Black cat Bones lulling me to sleep in the background – in fact my chest was pumping as I lay in my bed but it had been a long evening.

Next morning, the rain came pelting down and it rained for the rest of the day. I managed a hot shower while the cold rain dripped through the shower roof and then had a delicious breakfast of fruit, egg, bacon, juice and coffee -ready for the day. Unfortunately the torrential rain turned the concert arena into a quagmire but management were prepared and rescheduled all the river stage acts to the food court and the main stage to the late night stage where there was some cover. 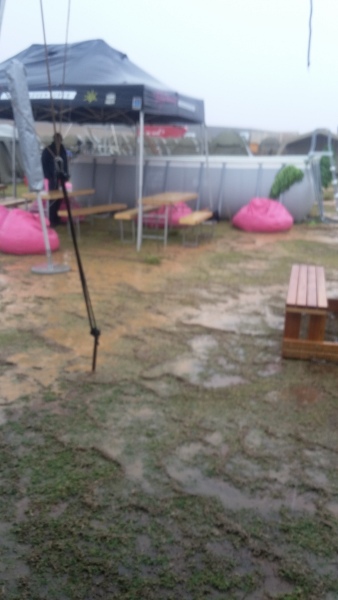 At the Food Court stage we watched Akkedis and then Ann Jangle who I had not seen before. In true Suzi Quatro style she entertained us with her mix of blues and rock, loving every moment of performing for us. Excellent! The shows at the food court were supposed to be acoustic but The Liminals had been scheduled to play at the River Stage and were not prepared for an acoustic set. Thank goodness management rallied around and organised a drum kit and The Liminals were up next.

The Liminals are a band out of Cape Town fronted by a delightful young man called Aviwe. He plays rhythm guitar and with all his stage energy easily got the crowd up and dancing. Angus on bass, Dillon on lead guitar and Mitchell on drums complete this excellent new band. They play rock with a bit of blues and some SA influence and have already released an album called Indigo. What a great performance by the guys! 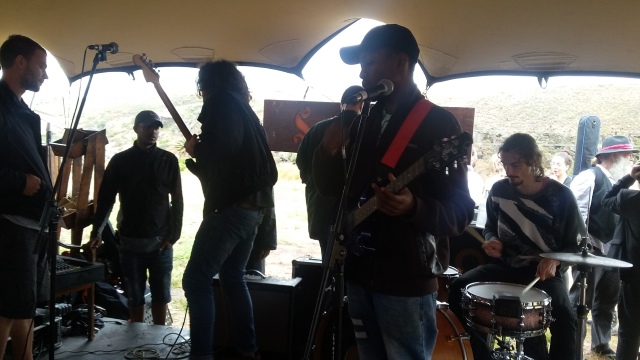 Kathryn Swain, a solo artist out of Cape Town then entertained us with a selection of songs from her pop/folk album called Little Box of Memories as well as a few excellent covers.The audience loved her and asked her for an encore which she duly obliged, playing her favourite song “So Fine” which had everyone up and dancing. 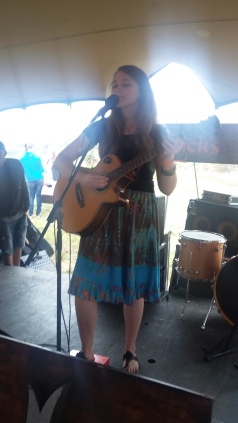 On the main stage that night we saw a UK musician called Tom James who was a bit to mellow for my liking but the party soon picked up with Basson Laubscher and the Violent Free Peace, Gerald Clark and the Deadmen and then our very own master blues musician Dan Patlansky. Clearly the theme for Friday evening was blues rock. Dan is a master musician who tours the world and plays with the likes of Joe Bonamassa. The crowd went ballistic for Dan as he “toyed” with his guitar, making it talk to the audience. Another stand out performance for Up The Creek.

Southern Wild fronted by Idols winner Dave Van Vuuren was a bit disappointing as I had seen them perform at River Republic festival a few years ago. They were followed by one of my favourite outfits, Taxi Violence. Taxi Violence are loud, raw and they rock. The 3000 strong crowd was crammed into the small tent taking refuge from the relentless rain and so it was perfect for crowd surfing which had George, the lead singer leaping into the crowd and then inviting audience members to participate. They played a lot of their new material so look out for a new album soon.

When we woke on Saturday, the rain had gone and the sun was out so we knew that the River Stage was on! We got down to the river early to secure a spot in the shade and then watched the never ending stream of party goers with their inflatables of different shapes, sizes and colours. You are not able to watch the bands unless you are in the water so it is advisable to bring a reasonable lilo that can support you in the water for about four hours. The river was a sight to behold with bright colours and an excitable crowd. We heard from The Wandering Gypsies, Forefront, Rubber Duc, Early Hours and Los Tacos. What a party atmosphere! 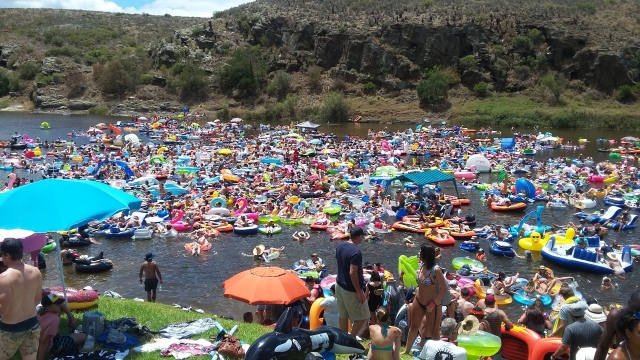 We went to the food court for a pizza and to watch a few other acts including Grace De La Hunt from Cape Town. Grace opened with some excellent covers and played a few of her own songs too. She has an amazing voice and sings pop rock songs. 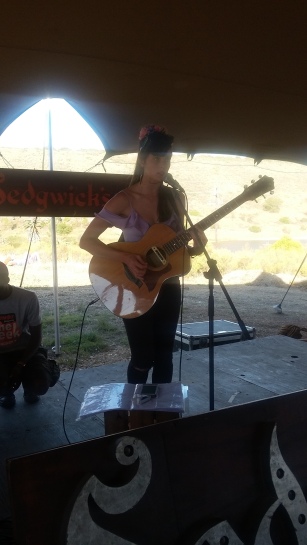 Meantime the main stage was open and the theme for Saturday evening seemed to be predominantly brass rock. First up was an excellent band called Opposite the Other who are a three piece from Cape Town playing alternative pop. I thought they were similar to Coldplay as their frontman plays piano and the music is very similar. A great performance and stage act. At one stage the lead singer was standing on his piano singing to the crowd.

Grassy Spark are always good to watch with their brass section but following them was a band I have not heard of before and one I really enjoyed – Slow Jack. They are a five piece out of Cape Town playing pop rock. It was getting dark and their lead singer Jayme van Tonder appeared on stage in a shiny one piece cat suit. She also plays the violin. Well their music really hit me – up beat party rock. I just had to buy their EP at the merch’ store after their amazing performance.

Crimson House were OK – just a bit busy for me but the half hour slot by the Jagermeister Brass Cartel was excellent and entertaining. About 20 brass instruments playing a multitude of pop songs. Such fun. And so now the audience was ready for the one and only Jack Parow.

I must say I wasn’t looking forward to the show but he literally blew us all away. The crowd absolutely loved him. He performed with the Happy Boys who looked to me like a few guys from the Cape minstrels. Power. Energy. Fun!

Throughout the festival the MC gave away “free shit” including T-shirts, caps, bandanas and late one evening I was almost hit by a flying pair of size 10 slip slops – all free shit compliments of our wonderful sponsors Jagermeister and Sedgewicks. 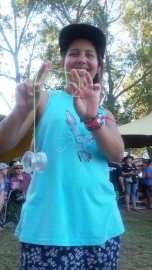 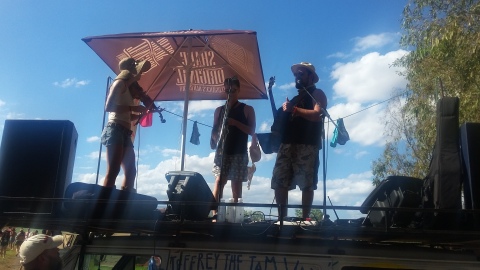 I have been to a few festivals including Rocking the Daisies and River Republic but for me this was the best of them all. Slick organisation, a wonderful crowd that was willing to share and make new friends, amazing local acts and just seriously good fun! Thanks Red Hot Events for all the hard work behind the scenes. We will be back next year!